The U.S. Department of Transportation’s National Research Council’s Strategic Highway Research Program (SHRP) Report deems spray injection patching as “the most economical and longest lasting method of pothole repair.”  This is primarily due to the benefit of having a single operator and the average patch lasting 4-7 years.  Report: fhwa.dot.gov/publications/research/infrastructure/pavements/ltpp/99168/99168.pdf

A more recent report by the Minnesota Department of Transportation conducted a present worth analysis of spray patching vs. traditional “throw and roll” and found the cost of spray patching to be 1/3 the cost ($2.31 per patch vs. $7.17 per patch), again due to lower labor and the fact that spray injection lasted 4 years compared to throw and roll patches having to be refilled annually due to wash out from weather. Report (pages 6-8) http://www.dot.state.mn.us/research/TS/2016/201603.pdf

Combine the proven benefits of spray patching with the latest technology found in the Schwarze RP7 Roadpatcher and you have a cost effective and reliable program for transportation infrastructure. The Schwarze® Roadpatcher™ list of standard features includes:

This system creates the highest quality patch available.  Learn more from our videos and case studies then set up your demo today. 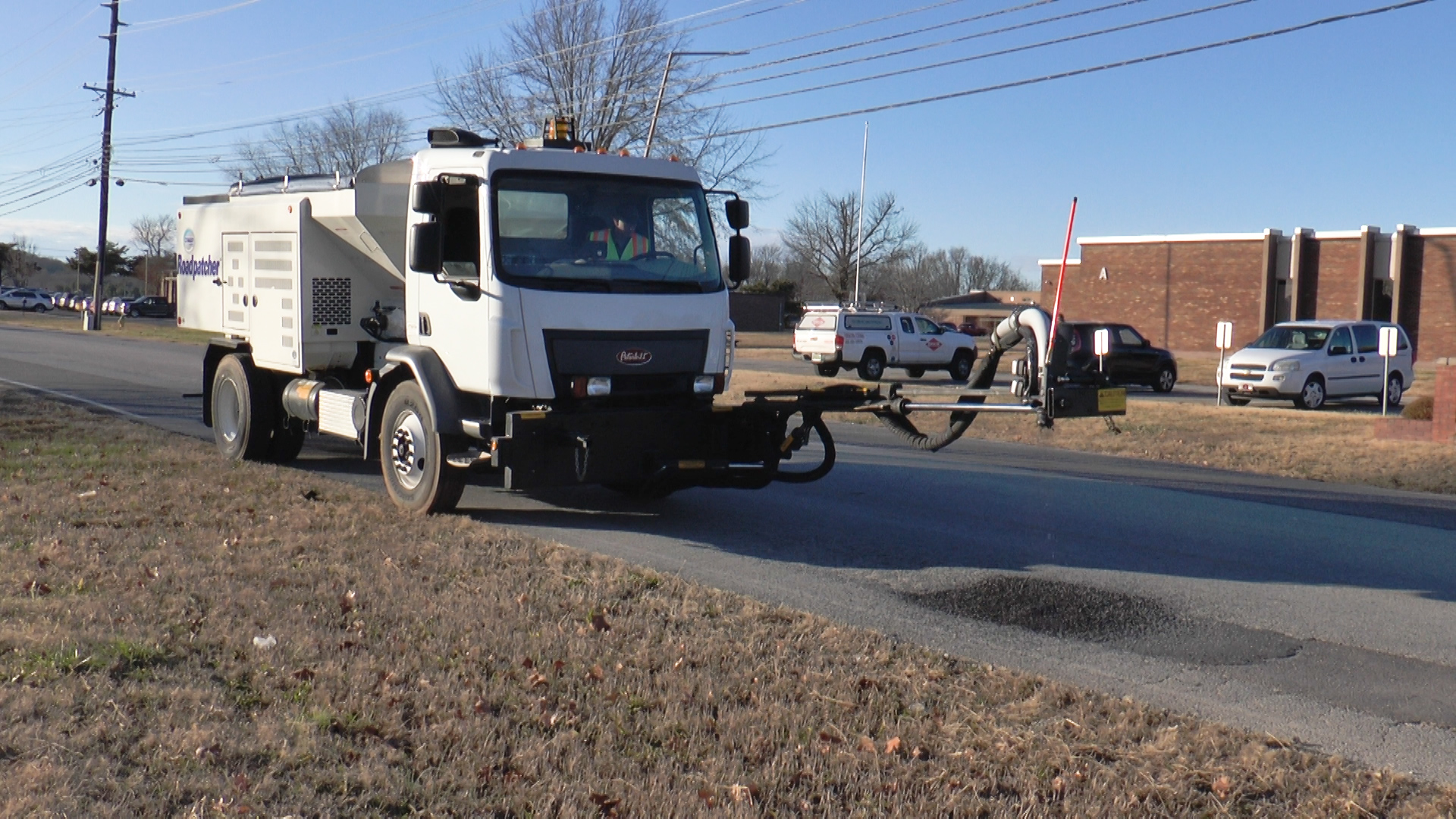 Like any community in the Upper Midwest, the city of Edina, Minn.—population 50,000—experiences its fair share of potholes. And like communities across the U.S., Edina has aging road infrastructure in need of repair. In June 2019, the city opted to invest in a piece of technology that could address both of these issues: a Roadpatcher from Schwarze Industries.

According to Chet Boom, an asphalt worker for Edina’s public works department, keeping up with the sheer volume of pothole repair and road maintenance can be a challenge. In his 11 years working for the city, he said, Edina has used a combination of hot-mix asphalt, cold-mix asphalt, and spray patching methods for pothole repair. The city opted for the Roadpatcher in large part because it improves efficiency by allowing for a single operator to conduct spray patching repairs, he said.

Repairs with the Roadpatcher utilize a four-step process. First, loose rock and debris are cleaned from the pothole. “Then, we will spray a layer of tack oil that acts as a binder to the sides of the hole for the new filler material to stick to,” Boom said. Next, a hot asphalt emulsion and aggregate mixture fills the hole. “Once the pothole is filled with the mix, we then cover it with a layer of dry rock to prevent bleed-through and vehicles tracking oil all over,” Boom concluded. The operator is able to conduct the entire process from the comfort and safety of the cab—another major factor in Edina’s decision to purchase the Roadpatcher.

Edina typically conducts spring and fall “pothole sweeps” during which the city has “crews working in neighborhoods catching up on anything that has opened up, though we do try to keep up throughout the course of the year,” Boom said.

The city also has mill and overlay and neighborhood reconstruction programs to help reduce the need for pothole repair. According to Boom, along with using it for pothole repair, Edina has been able to utilize the Roadpatcher to blend the edges of concrete road panels, seal seams between paver passes in the center of the road, and level areas of roads that have settled.

In addition to efficiency and operator safety, customer service was a major factor in Edina’s decision to purchase the Roadpatcher. The city worked with equipment dealer RCM Specialties, which has provided training and support as operators learned to use the Roadpatcher, Boom said. Although much of the operator training occurred on the job—according to Boom, it’s “really the only way to learn how to use the machine”—he was grateful that RCM made itself available for support. “A big help was [that] while I was out in the field, I could always call RCM with questions,” he said. RCM also provided maintenance training to help familiarize public works department employees with the Roadpatcher’s engines and hydraulic systems.

According to Boom, since Edina began using the Roadpatcher, the city has found that the equipment’s all-in-one repair process has improved efficiency by allowing operators to move quickly from one site to another. Another benefit has been the quality of the repairs, with the Roadpatcher utilizing “a patch material that has good adhesion for repairs around utilities such as gate valves and manholes [and] good adhesion on our concrete streets.”

So far, Boom said, the people of Edina have been pleased with the results of using the Roadpatcher as well. “I think generally the public’s response has been positive,” he said. “They are always glad to see potholes being filled.” 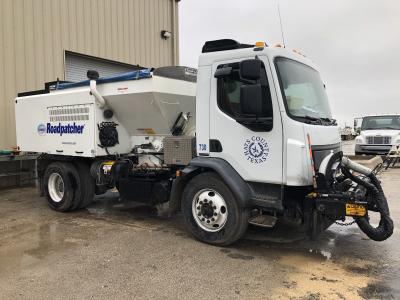 Hay County, Texas relies on the Roadpatcher from Schwarze for roadway surface repair.

Municipalities often find pothole repair to be both aggravating and expensive. One cause for these woes is the traditional repair technique known as “throw and go.” Although it may be quick, repairs completed with this technique have a short lifespan.

Crews are “truly having to go back and continually fix that same hole,” said Frank Connelly of RCM Specialties, a dealer of spray patching pavement repair equipment. Because those crews typically consist of three to five workers, these yearly repairs become costly from a labor perspective.

According to a 2016 study published by the Minnesota Department of Transportation, “The ideal repair would be a repair that lasts at least a year, can be performed in all seasons, and can be installed easily and relatively quickly—all while keeping traffic delays to a minimum.” Spray injection patching hits those qualifications, and, when utilizing a truck-mounted model, requires just one operator to complete pothole repairs.

Considering the Costs
In the early 2000s, a study by the Virginia Transportation Research Council deemed the performance of spray injection patches as “excellent.” Researchers determined the life expectancy of the repairs was three to five years, compared to just one year for traditional pavement repair methods.

The extended lifespan of spray patches can result in major cost savings for municipalities. According to the study, the initial cost of spray patching was approximately 18 percent more per square yard than skin patching, including materials, equipment and personnel. “Even though the initial cost of the spray injection patches was higher, the superior longevity of the spray injection patches overrode the higher initial cost,” the researchers wrote. Over a four-year span, they determined, the present worth per square yard of spray patching was approximately 30 percent that of skin patching. “The large difference in present worth for the two methods is because the skin patching had to be repeated on an approximately annual basis,” the study explained.

Thinking Long-Term
As many municipalities face tight budgets, any expense requires careful consideration of return on investment. While cities will quickly realize savings by utilizing spray patching for pothole repair, the versatility of the technology also allows it to factor into long-term budgeting.

Spray patchers like the Roadpatcher from Schwarze are multipurpose machines—in addition to pothole repair, spray injection patching technology can be used to repair alligator cracking and cup cracking as well as perform other road maintenance functions. Hays County in Texas has found it to be especially helpful for chip sealing. 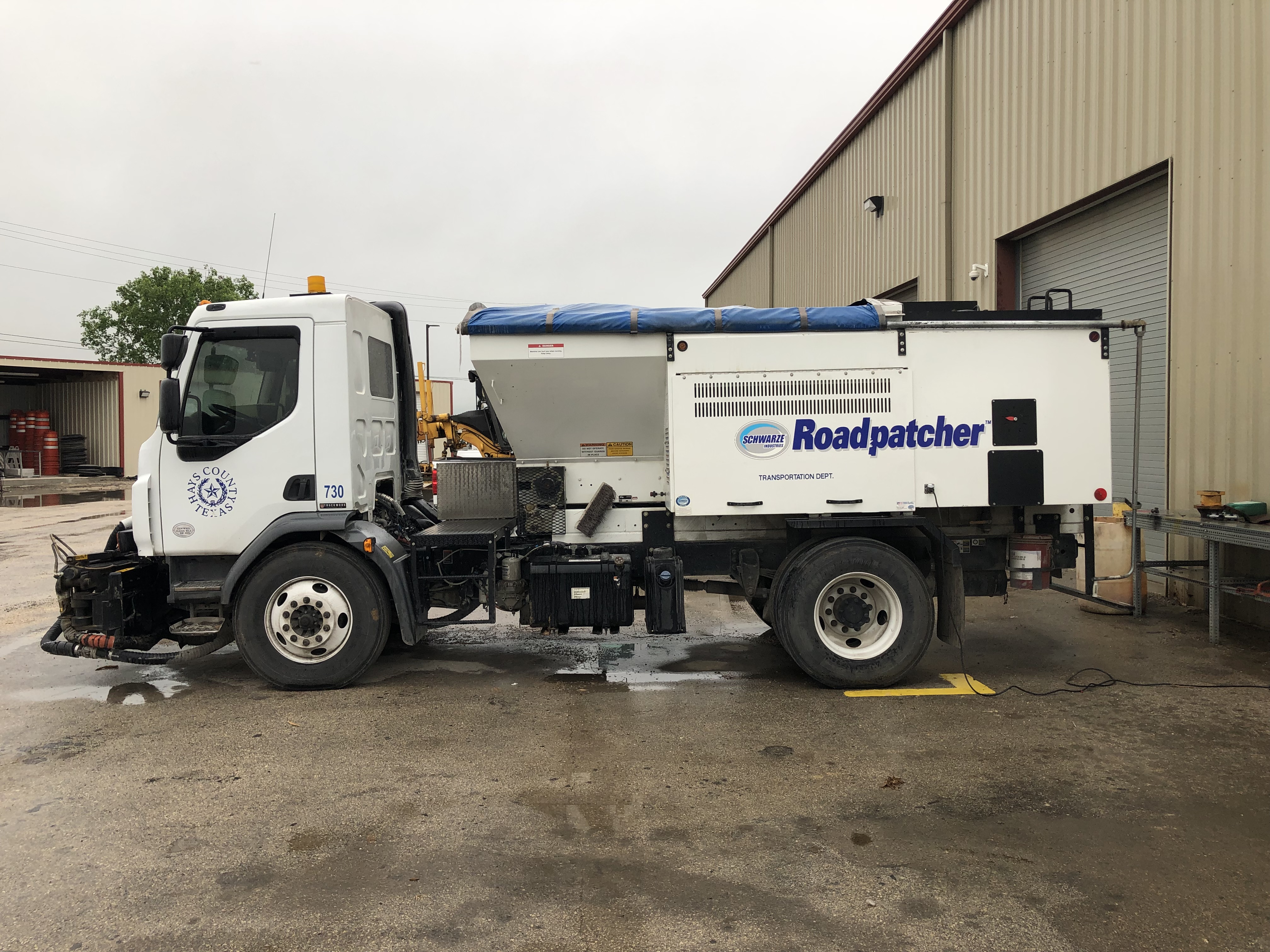 “We use the Roadpatcher to spray smaller roadway areas where it is not feasible to use the larger chip spreader crew,” said Aaron Jones, maintenance superintendent for the county. He describes the equipment as “vital” to the county’s day-to-day operations. “It gives us the ability to respond to requests for repairs quickly and efficiently,” Jones said, adding that the county also utilizes the Roadpatcher to repair potholes and shoulders and perform “any surface repair needed on the roadways.”

These additional functions allow municipalities to incorporate spray patching into long-term road maintenance programs. According to Connelly, in the past some municipalities developed “we’ll just rip it up” philosophies about their roads. When the road reached the end of its lifespan, they would simply rip it up and construct a new one.

“That gets really costly over time,” he explained. By utilizing spray patching for repairs, Connelly said that municipalities are able to extend the lifespan of some of those roadways that are marginal, allowing them to focus on roads that are “worst-case scenarios” first.

The fact that spray patch repairs can last up to five years allows them to get a handle on their road maintenance priorities. “From the savings standpoint alone of not having to go back out and do the repair again and again and again, that’s huge,” Connelly said. Those savings combine with the lower labor and materials costs, improved safety for operators and ability to complete repairs throughout the year to make spray patching a cost-efficient technology for municipalities in the short and long terms. 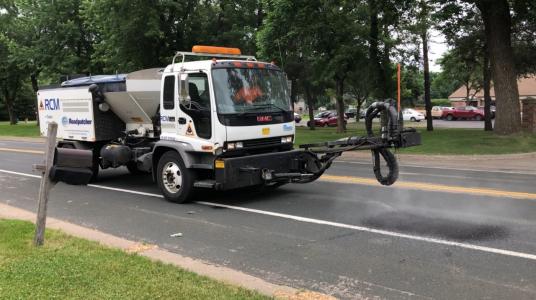 Truck-mounted spray patchers can be operated by just one worker, helping municipalities save on labor costs..

For many cities plagued by potholes, it may seem like the repairs never end—and that’s because for many cities using traditional “throw-and-go” repair methods, workers often find themselves fixing the same pothole over and over again.

“They’re truly just throwing asphalt in the hole, and they’re going to the next hole,” said Frank Connelly of RCM Specialties Inc., a dealer of pavement repair equipment. “It’s a very fast process, but there’s no longevity to it.”

How It Works
Truck-mounted models, such as Schwarze Industries’ Roadpatcher, are all-in-one solutions for spray patching. The Roadpatcher utilizes a four-step process to complete pothole repairs. First, a blower uses compressed air to clean debris from the pothole and surrounding cracks. Second, the area is tacked with a hot asphalt emulsion to provide adhesion to the existing pavement. Next, the pothole is filled with a combination of the aggregate mix and the hot asphalt emulsion. Finally, a dry coat is applied. 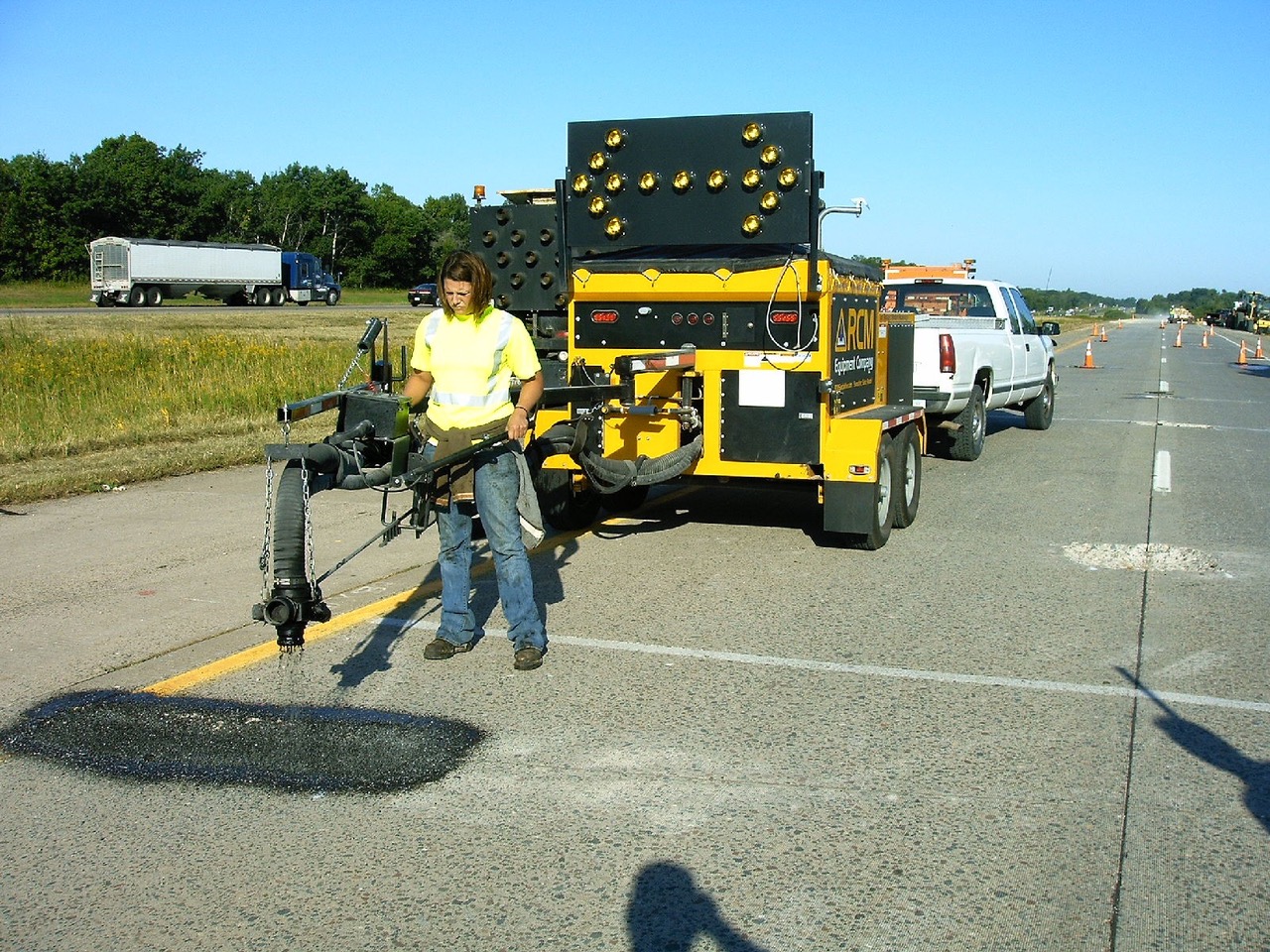 The average lifespan of a spray patch repair is five to seven years.

According to Connelly, using this method with the proper aggregate mix results in a 90 percent or greater compaction rate, without the use of a compactor. “[Operators] don’t have to go and drive over it [and] they don’t have to roll it,” he said. “They can truly do their patch and drive to the next one.”

Truck-mounted spray patchers can be operated by just one worker, helping municipalities save on labor costs when compared with the throw-and-go method, which typically requires a crew of three to five people. The operator is able to stay in the cab of the truck, allowing for safe completion of repairs, even on high-volume roads. Connelly noted that this also helps limit the operator’s exposure to silica dust.

Training is required to familiarize the operator with the spray patching process and controls. According to Connelly, the Roadpatcher is “truly one of the easiest for the operator to get in step with.” Once up to speed with the process, one operator can put down approximately 9 tons of material in a day, he said. 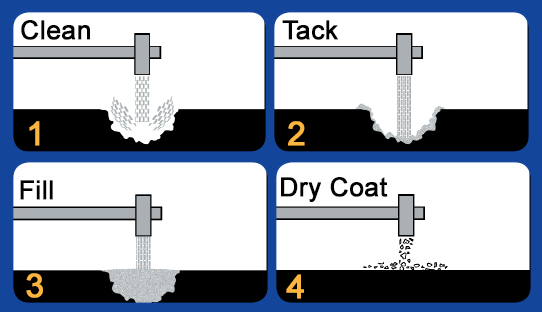 Once a pothole has been repaired using spray patching, it is unlikely the municipality will have to revisit it anytime soon, as the average lifespan of a spray patch repair is five to seven years. The process is effective for shallow or deep pothole repairs, and repairs can be conducted year-round.

Connelly warns against pigeonholing spray patching as just a pothole repair technology, however. Other applications include repairing alligator cracking and cup cracking, priming for chip sealing and more. “You can treat this as a traditional type of an asphalt, to where if you needed to do a utility cut repair, you can do that,” he said. “You can roll it. You can plate it. It’s a very versatile process.”

I WOULD LIKE TO KNOW MORE ABOUT THE ROADPATCHER