I’ve often wondered when I see something advertised as ‘Heavy Duty,’ if something is so much better, why isn’t it the standard or the norm? Why is there even a ‘Light Duty’ or ‘Regular Duty’?

In the sweeping industry, when it comes to replacement parts or components, it’s not always about heavy-duty being a better product or option. Often it has everything to do with the application itself. Heavy-duty isn’t always the best choice, but sometimes it’s the smart choice. Depending on the product, you can save big money by investing a bit more up front for the heavy-duty. We’ll look at both examples, Application vs. Durability.

Let’s take the sweeping head flaps or ‘rubbers’ for example. There may be a light-duty and a heavy-duty flap available. These may also be referred to as Litter Flap and Power Flap, and there is a significant performance difference depending on your application. If you are sweeping light litter, trash, and paper, the regular or litter flap is best suited for this type of debris. The lighter front flap will allow the litter and lighter debris to pass under it and into the head suction channel. The heavy-duty flap would be better suited for heavy materials such as sand, gravel, and good old dirt. When using the heavy-duty or power-flap material on light litter such as paper, Styrofoam cups, plastic bottles, etc., it will often just push the litter along and never sweep it up. This isn’t a sweeper performance issue but about using the right tool for the job. 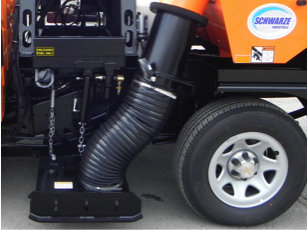 Head hoses are a bit different. A heavy-duty vulcanized rubber suction and exhaust hose can last up to ten times longer than a standard flex hose. Sure, it’s a bit pricier up front but let’s do the math. If you’re paying $100 for each flex hose and replacing them just twice a year (and that’s conservative) you’re spending $400 per year on the hoses per machine. Let’s say a heavy-duty hose will run you $400 each (4 times what you’re paying for the flex). Over a ten year period, you’re spending $4,000 on the flex hoses, and you’re only spending a ‘one time’ $800 for the heavy-duty hoses. Even if you end up replacing the heavy-duty hoses twice during that period, you’re still spending less than half. Not even factoring in the labor time it costs you to change out the flex hoses at least twice a year.

Most manufacturers offer a heavy-duty bumper as an option. But your truck came with a regular bumper and rest assured you paid good money for it. How good? As much as a thousand dollars ‘good.’ If (or when) damaged, plan on paying about $400-$500 to replace the front grill and another $500-$600 each for the headlight assemblies. 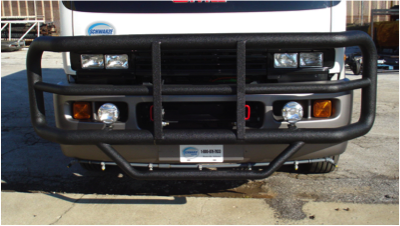 The heavy-duty bumper option offered by sweeper manufacturers range anywhere from $500 to $1,000. While the bumper pictured may be a bit extreme for a parking lot sweeper it would likely pay for itself in a short period. If this one-time investment can save your chassis from the demolition derby you know your operators are entering on a nightly basis, why wouldn’t you invest to protect your truck? Spend a little to save a lot. It’s a no-brainer and your sweeper truck will look much better much longer.

You’ll seldom see a battery labeled as ‘Heavy Duty’ these days. So, when it comes to batteries, simply do your homework. Consider several factors when choosing a battery. Consider if you want to invest in an Absorbed Glass Mat battery or stick with the more traditional maintenance free lead acid battery. The AGM’s will tolerate draining and recharging much better than a traditional battery and are becoming the norm in the automotive industry. They will cost you anywhere from one-and-a-half to twice the price of a traditional battery but may be worth the extra cash up front. Also, choose a fresh battery. Yes, they’re freshness dated. A battery loses strength over time when sitting on the shelf. Choose one that’s six months old or less. Refer to the shipping date code on the battery and if you can’t decipher it, get a salesperson to do it for you. Hot environments are hard on batteries and can cause plate corrosion and vaporize electrolytes. Keep this in mind and choose a battery that has proven itself in testing and has done well in a cold crank test. Lastly, compare warranties as these can vary a great deal. The warranty code will reflect the full free replacement period and then the prorated period. A battery with a warranty of 24/60 gives you full replacement up to 24 months and then it’s prorated for the next three years or 36 months.

Heavy-duty battery cables also make a difference, and this is one place you don’t want to be under rated. Select a Heavy Duty large gauge cable with the highest amp rating. You’ll find 600 amps to be the largest in the consumer grade, and 800 amps cable is a good commercial grade. If you’ve ever tried to jump start a car with one of those dollar store cables, you know what I’m talking about. If you need jumper cables, you’re not looking to ‘trickle’ charge your battery. You need to go now! Pay a little extra and you know you’ll get the juice!